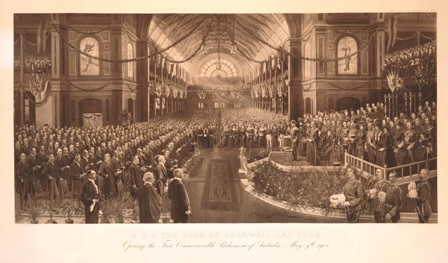 "HRH the Duke of Cornwall and York opening the first Commonwealth Parliament of Australia, 9 May 1901"

The Original print was Photo-engraved (Photo-Gravured) after a painting by James Charles Nuttal (1872-1934) Printed by Goupil et Cie., Paris., 1902.

The year 2001, not only was the beginning of the next millennium, it marked the Centenary of Australia’s Federation. To celebrate this important milestone in our nation’s history, the Antiquarian Print Gallery issued this Conservation Cotton paper Archival Limited Edition Giclee Facsimile to the size of the original photo-engraving which was marketed by John Martin & Co. in Adelaide during 1903.

On May 9th 1901, in the Melbourne Exhibition Building, the Governor General Lord Hopetoun, presided over the opening of Australia’s first Parliament in front of 12,000 invited dignitaries and their families. John Adrian Louis Hope, was the 7th Earl of Hopetoun and the first Governor-General of Australia. The broad cross section of individuals invited from each state emphasized Prime Minister Edmund Barton’s (standing middle of front row facing the Duke) desire to make the event as inclusive as possible. Young Melbourne artist, Charles Nuttal (1872-1934), was commissioned by a group of Melbourne businessmen, The Historical Picture Association, to paint the historic scene. Charles Nuttal's painting was designed to be a large monochromatic, a sepia artwork, as he was colorblind  Many will be familiar with Tom Robert’s more impressionistic and evocative rendition of the event which hangs in Canberra. Nuttal approached this project differently. He aimed for clarity and detail with his interpretation containing 343 recognizable portraits of the dignitaries present at the historic opening ceremony. The respected firm of Goupil & Co. in Paris was engaged to produce sepia photogravures of the image so that a patriotic public in Australia might relive the historic moment. These photogravures were the largest one made until that point Indeed it was intended that this scene should grace many homes and public places around the new nation. The prints were marketed under the slogan "No Australian Home will be complete without a Copy" A hand written script in white paint on a painted dark green ply mat around the original photogravure that was presented to the "Town Hall of Adelaide" by "Local Residents" in November 1909 states also records: “An Artist’s Proof Copy of this Picture was exhibited, by special permission of the President of the Senate, in the Queen’s Hall, at the opening Second Session of the First Federal Parliament by His Excellency the Governor-General Lord Tennyson, on May 9th, 1903”

James Charles Nuttal had been a pupil of Frederick McCubbbin. He had also worked as an illustrator in Melbourne. Nuttall belonged to the Melbourne Savage Club as did McCubbin. He was also the secretary of the Black and White Club (1900) before its affiliation with the Victorian Artists Society. A contemporary sense of achievement and pride in our Federation planned to have Charles Nutall's rendering of our first Parliamentary sitting hung not only on the walls of schools, libraries, public buildings & peoples living rooms, after 50 years enthusiasm had waned. The original Nuttall painting was hoped to hang in the Federal Parliament. However, it was returned to the Exhibition Building in Melbourne. Tom Roberts won that honor with "The Big Picture" his more colorful and on-trend impressionistic interpretation. Charles Nuttal's artwork was instead overlooked and found its way to the basement, out of sight and out of mind, often a fatal combination to befall artwork. The damp conditions caused major damage. It was restored by painting conservator, Amam Siddique for two years, with the invaluable detail captured by the Goupil et Cie photogravures.